Alexander Bachmann, CEO & Founder
Becoming an entrepreneur is not an easy feat. It requires unfailing perseverance, dedication, passion, and the ability to swim past all the adversities. No one probably knows it better than Alexander Bachmann! Just at the age of 15 and with just $27 in his pocket, he borrowed from a friend, Bachmann started walking toward his dream.

He created a simple website, then formed a company called Binlayer, and finally after that , Admitad was born - an affiliate network providing cost-per-action (CPA) marketing and attracting clients for the internet providers and mobile companies After well-establishing itself in Germany, Bachmann started harnessing business opportunities from the international market and extended his CPA networks to Russia where literally nobody knew at this time how affiliate business works.

Today, Admitad has outgrown itself to become one of the fast growing IT companies worldwide. The firm is functional across nine countries, including its HQ Germany, the UAE, the U.S., Brazil, Ukraine, and India. Admitad just reported a total GMV of $11.6 billion for advertisers in 2021, and proudly counts $700 million payments to publishers in the last ten years; a remarkable growth within a short span.

While there are numerous business and reward models sprawled across the retail marketing and advertising space, what makes Admitad unique is its continuous development and adoption of the CPA-based model. The model allows advertisers and publishers to pay only for their orders and not clicks or traffic, making Admitad a transparent and fair business partner.

As early as in 2015, Admitad created an additional service, being the second after launching an affiliate platform, for managing and optimizing budgets in advertising networks. Together with the affiliate network, this provided a foothold for the future structure. "When I was working as a publisher, I realized that no company had client services capable of satisfying my publishing needs, and this is what inspired me to jumpstart Admitad," - says Bachman, who dons the CEO role at Admitad.

Last couple of weeks, the company has reviewed its 3-year round of investing in a massive transformation process from a single affiliate network into a multi-product company. Over $30 Million was spent on building, acquiring, and implementing businesses in the new global structure. Admitad still keeps its core focus on marketing and financial services offering these across several businesses globally.

Bachmann invests in buying companies, setting up representative offices in various countries, launching and scaling new businesses with Admitad Projects, a startup studio. Over 300 business ideas were screened up to day so far, four of which have grown to round A series.

Only in the last year, Admitad has acquired smart shopping service CheckScan, insurance platform Pampadu and tracking tool for performance marketing Tapfiliate. The list is likely to extend in the next three years, with over a 100 million US-Dollar budget planned for the global expansion. The vision of Bachmann is to become a global IT-enterprise with flexibility, adaptive practice and a seamlessly run structure that can handle every uncertainty on the market.

“I used to think that we should only do certain things, stay in our segment ... But these thoughts were delusions. Now I understand that thanks to the transformation and a new company structure, we can do anything, with the affiliate network being just one of the building blocks of this structure,” explains Bachmann.

But money is not what it is all about. During the pandemic, Bachmann launched a special fund to help the family members and partners of those employees who had taken the brunt of the first wave of the pandemic in 2020. Instead of cutting headcount, the company grew itself as a team by onboarding top talents and specialists of the marketing space to provide uninterrupted services for better customer satisfaction. “We are in the people’s business, they are our most valuable asset,” says Bachmann and points out that he is planning to offer 15 percent shares to top management and key employees to keep his growing Admitad family happy.

Today, more and more people are using internet and retail platforms to shop online. The traffic is only increasing day-by-day, creating a wonderful opportunity for advertisers and content publishers to monetize it


It's not just Admitad's high-level capabilities that put the company ahead of its competitors but also how it handles each of its client engagements. To elaborate further, Bachmann shares several success stories. For example, for over five years, Admitad has been partnering with a platform, booking.com, to push their offers through Admitad Affiliate. The service helped the client multiply its overall GMV and increase orders placed through affiliate programs up to three times in the last years. The company also helped booking.com drive traffic to their sites and create awareness campaigns on Russian and CIS countries' markets.

Admitad has enabled several other well-reputed brands and platforms, including Focus, Burda Media, Lenovo, Adobe, Radisson, Nike, and Adidas to inform their customers about offers and ultimately push their sales online during the pandemic.

"Today, more and more people are using the internet and retail platforms to shop and interact online. The traffic is only increasing day-by-day, creating a wonderful opportunity for brands and content creators to monetize it. At Admitad, we are just helping them harness the potential of this promising market efficiently," - concludes Bachmann.

Description
Admitad is a global IT company that develops and invests in advertising and monetization technologies, partnership services and earning management, media buying and smart shopping solutions. 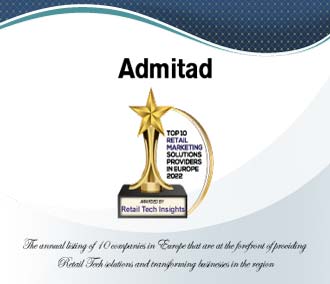